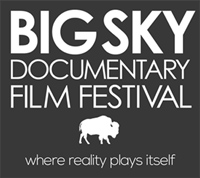 The Big Sky Documentary Film Festival has become the largest cinema event in Montana and the premiere venue for non-fiction film in the American West. In 2012, the festival drew an audience of 20,000 and received nearly 1000 film entries from every corner of the globe. The BSDFF offers a unique setting for filmmakers to premiere new work and for audiences to see innovative new films, as well as classics in the genre. The festival hosts over seventy-five visiting artists, and presents an average of 125 non-fiction films annually at the historic Wilma Theater, The Top Hat, and Crystal Theater in downtown Missoula. The Big Sky Documentary Film Festival runs annually in February. The dates for the next upcoming festival are February 6th – 16th of 2015.

The Big Sky Film Series is a weekly screening series highlighting traditional and innovative non-fiction film and video. Screenings are held every monday of each month at the Top Hat Lounge in downtown Missoula and are free and open to the public. Selections for the Big Sky Film Series are by invitation only. If you would like us to consider a film or video for the series, email a brief synopsis, release date, and primary contact information.

Big Sky Documentary Film Festival‚ DocShop is an industry-focused feature offering documentary filmmakers opportunities for networking, discussions, and professional development. The DocShop brings industry decision-makers and experts to discuss and learn about what matters most in the world of documentary film. Starting in 2015, every year will focus on a slice of the industry embracing change and growth. The dates for the next DocShop are¬†February 9th ‚ 13th of 2015.